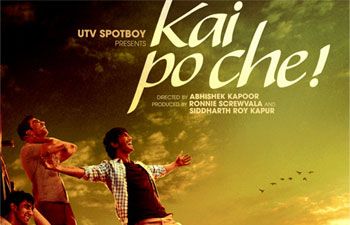 After “3 Idiots”,it is “Kai Po Che!”.Both have scripts taken from Chetan Bhagat’s novels- “Five Point Someone” and “The 3 Mistakes of my Life” respectively.

No wonder why today Bhagat is highly impressed with “Kai Po Che!”, which recently premiered at the Berlin International Film Festival.

“I am more than satisfied, I am very happy. Forget Indians, you can show it to anyone, it is of such high standards. It really touches you, very emotional and there would be hardly anyone who would not be touched by the film,” Bhagat reportedly said.

“Even European audiences, who don’t know about Gujarat or India, Hindu religion or Muslims, they were so moved by it and that too watching it with subtitles. I think it is going to be something else here,” he added.