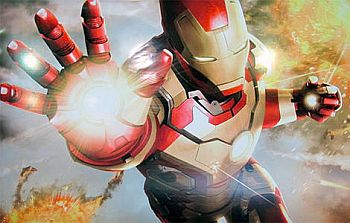 India is ahead of the US in so far as launch of the Superhero film Iron Man 3 is concerned.

The film-third in the series-starring Robert Downey Jr as industrialist Tony Stark aka Iron Man, will hit Indian screens on April 26, a week before it releases in the US.

The movie shows Stark going on a journey of revenge as his world is reduced to rubble by a malevolent enemy.While he fights,he comes to know the answer to the question that has secretly haunted him: does the man make the suit or does the suit make the man?

Other stars of this film, based on Marvel’s iconic Super Hero Iron Man, who first appeared on the pages of Tales of Suspense  debut with the Invincible Iron Man  in May of 1968,aiming to attract the young Indians were: Gwyneth Paltrow, Don Cheadle, Guy Pearce, Rebecca Hall, Stephanie Szostak, James Badge Dale with Jon Favreau and Ben Kingsley.

It is directed by Shane Black.