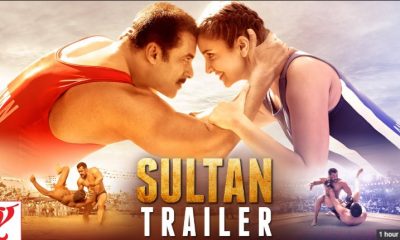 Ranchi : Glued to their TV sets, computers and phones, millions of fans sat not-so-patiently waiting for Salman Khan starrer ‘Sultan’ trailer to appear on their screens. At around 8 pm yesterday (May 24), the makers released the most awaited trailerand everyone stopped what they were doing and joined Sultan and Aarfa on their journey.

The impressive trailer of Ali Abbas Zafar’s film is high on romance, passion and struggle; three key elements that easily succeed in keeping a viewer on the hook. Ever since the trailer came out, there’s a lot of buzz.

While the trailer has received both positive and negative reaction from the audience, it has already crossed over 1.5 million views on YouTube.

Salman and Anushka starrer ‘Sultan’ is a classic underdog tale about a wrestler who makes a comeback defeating all odds staked up against him, Sultan’s journey will bring alive his heartfelt love story. The film promises mint fresh romance, an inspiring tale and unique wrestling action.