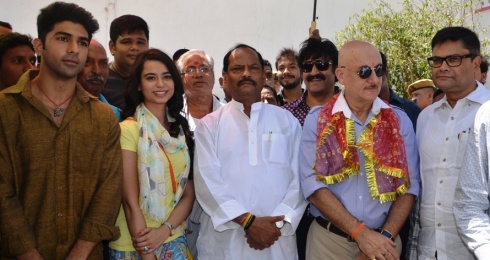 Jhaarkhand Chief Minister Raghubar Das today opined that the film industry can play a significant role in promoting the rich culture and tourism in the state.

“The song,music and dance are in the soil of Jharkhand.Its rich culture and tourism can be promoted by the film industry”,he said while speaking on the occasion of the Muhurat(an auspicious time for the film to begin) of the film-Gunde And Gudia-at Jagannathpur Mandir complex in Ranchi on Friday.The well known actor of the Bollywood Anupam Kher was present there.

This is for the first time the start of the film has taken place in Jharkhand after the state government adopted a film policy in Jharkhand,said the CM adding that “it is a matter of happniess for all of us”.

“There is no shortage of talents in Jharkhand.When shooting of films will take place,the local artists will get an opportunity to show case their talents.The state government will assist in the process of shooting of films”,promised the CM.

“With involvement of stars like Anupam Kher in the Gunde And Gudia film,I am sure,in coming days more shooting of films will take place in the state.This will provide jobs to people and promote tourism in the state”,said the CM.

He pointed out that Anupam Kher is trying to promote film industry in Jharkhand.”Hope,he will bring more films and artists to Jharkhand”,said the CM Raghubar Das who together with Anupam Kher offered prayers at Jagannathpur temple.

1.Shows Muhurat of the film Gunde And Gudia at Jagannathpur temple in Ranchi by Jharkhand CM Raghubar Das.