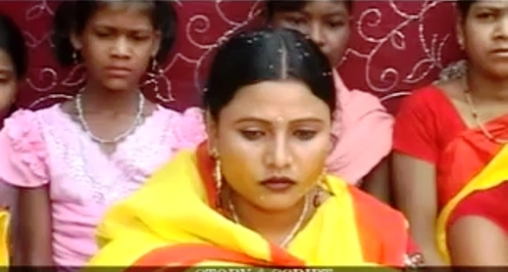 In fact,the Censor Board had approved the film. The theme of this Santhali film centres around empowerment of women in the tribal Santhali society.

Jaiprakash Murmu and Sarita Hembrum can anytime give the Khans, Akshay Kumar, Hrithik Roshan and Katrina Kaif of Bollywood a run for their money.

Supporting the industry, Francis Xavier Soren has launched a fashion magazine named BAHA (Flower) from Jamshedpur with a sole purpose to promote and exhibit the local talents and models to the outside world.

However,as it is in nascent stage, Santhali film industry has limited viewership and earns less business in the market. Finding someone to finance a Santahli film is a daunting task. They are low cost films. A film goes to floor for a paltry budget of Rs 5 to 7 lakhs. Noted actress Ganga Rani Thapa, who is playing the female lead in film JOHAR, said that they keep getting encouraging messages from the audience. “Words of encouragement from our fans encourage us to perform better,” she says.

Thapa said besides entertaining, Santhali films carry strong social messages revolving around issues like women empowerment, money lending system, need of education among the womenfolk, and evils of alcoholic addiction. Besides that you also get to see impact of Bollywood in our Sathali films,” Thapa added.

Endowed with picturesque hills, mountains, forests, waterfalls the countryside in Jharkhand provides ideal locales for the film crews to shoot. Massanjore Dam in Dumka, Maithan Dam in Dhanbad, Dimna Lake and Jubilee Park in Jamshedpur, Rukka Dam in Ranchi, Dassam and Jonha falls in Ranchi are some of the preferred destinations for shooting.