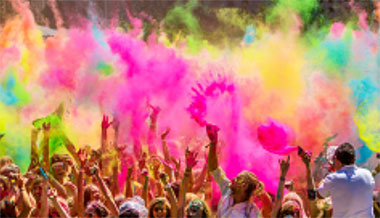 This year again Excelsior High School Grounds in Los Angeles are going to be the venue of Holi celebrations.

The entry is subject to the ticket owned by the visitor.The Grounds are located at 15711 Pioneer Blvd, Norwalk 90650.This will be the 4th Annual Holi Festival of Colours in Los Angeles when hundreds of Indians and Americans are slated to play Holi,reports www.festivalofcolorsusa.com

As it is,like every year in the past, Holi is celebrated on the full moon day in the the Hindu month, Phalgun.This year,iIn 2016, Holi celebration date is fixed on March 24.

Ahead of Holi,Hindus across the country are out for fun, entertainment, enjoyment, get together, lots of music and dancing, along with colorful environment all around.

Every body knows that Holi is celebrated by the Indians all over the world with enthusiasm.In India, Holi is considered to be the festival when people forget all differences and hug each other with love and apply colors as a greeting.

Small kids are seen playing with colors even before Holi has arrived. They can be seen throwing balloons filled with water or colors by using Pichkaris (water gun) on passing by vehicles as well as people. But, no one feels bad, as on Holi it is said- ‘Bura Na Mano Holi Hai’ (Don’t Mind it’s Holi).

In Ranchi,residents of Shivpuri are slated to celebrate Holi by holding a Mela at Birsa Munda park.Jharkhand Urban Development Minister C.P.Singh is slaated to inaugurate the four day function at Shivpuri.