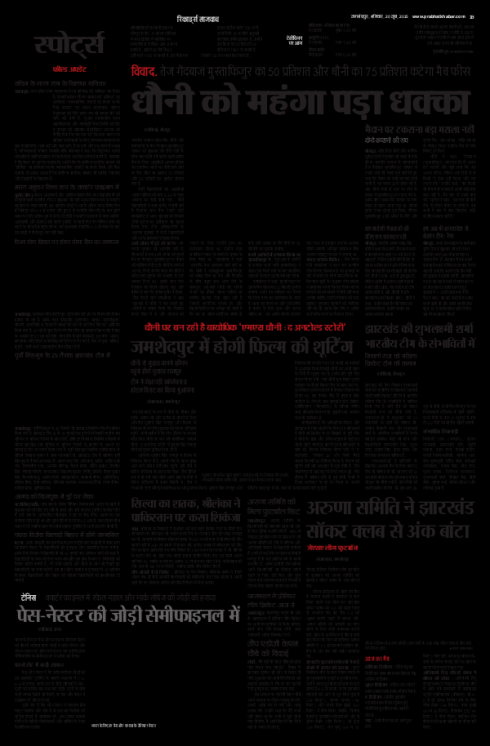 Bollywood is getting ready to record a film on Prince of Jharkhand-Team India Captain-Mahendra Singh Dhoni.

Billed as ‘MS Dhoni:The Untold Story’,the film is going to show his life and its background.Since he was born and brought up in Ranchi,played football to pick up cricket as his profession,the film is going to depict all these and much more,especially his love for parents and friends as well as dogs.

Apart from the DAV school,Shayamali,where he studied and the MECON’s stadium in Ranchi where he played cricket during school days,the film is going to show Jamshedpur,its Keenan stadium where he represented the State in Ranji Trophy cricket tournament and Kharagpur in West Bengal where he served the Indian Railways as Ticket Collector,are going to be shown in this film.

Directed by Neeraj Pandey,MS Dhoni:The Untold Story-is a biopic film.Sushant Singh Rajput is the actor who is playing the role of Dhoni.

In fact,Pandey and Rajput together with Jharkhand State Cricket Association’s Secretary Rajesh Verma,Trainer Milan Dutta, Subroto Das and his wife Kajal visited on Friday Keenan Stadium and Hotel Virat in Jamshedpur where Dhoni used to stay during his stay there.Today,Pandey and Rajput were there at Kharagpur Railway station.