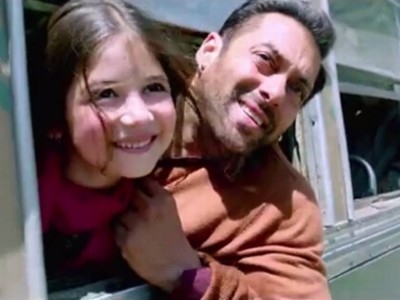 Salman Khan is out to come up with another hit film-Bajrangi Bhaijaan.

Though the suting is still on,the film is set to be released on the occasion of Eid festival on July 18.

Nearly a month in advance,Bajrangi Bhaijaan has become the talk in the Bollywood.The trailer of the Bollywood film,directed by Kabir Khan with Salman as ‘Bajrangi’-the hero-and Kareena Kapoor as actress,was released on Thursday.

The trailer shows Salman in tears as he exhibited his feeling from India to Pakistan.The two -and -half -minute video shows as follows:

*A little girl called Harshaali Malthotra.After Salman asked her about her nationality,she failed to answer as she remains unaware about it.

*When Pawan learns that she is from Pakistan after India-Pakistan cricket match,he was asked to -the fact that she she hailed from Pakistan.Salman was given order to take her to Pakistan without any passport or visa.

“Right now when the festival of Ramadan is on,this film has attracted the attention of the media and Bollywood film lovers in India and Pakistan.It is almost certain that this film will be big hit and break reclords”,said Salim Akhter,a journalist.”It is going to be a win-win situation for Salman at the box office.”