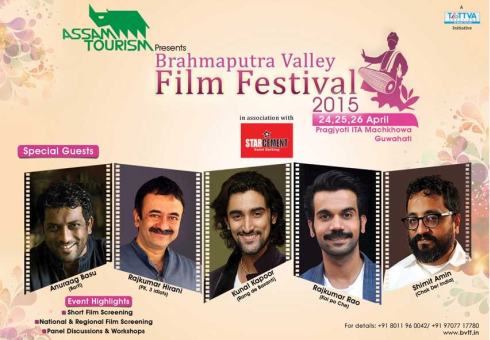 Following the huge success of the initial first two editions in 2013 and 2014, the third edition of the festival is all set to be launched on a much bigger scale this year.

This year nationally and internationally renowned film personalities such as, Rajkumar Hirani, director of popular movies such as PK, 3 Idiots, Lage Raho Munnabhai and Munnabhai MBBS, Shimit Amin, director of Chak De India will come to Guwahati to attend the three-day festival.

The featured directors will be accompanied by national award-winning actor Rajkumar Rao, popularly known for his roles in Shahid, Citylights, Queen and Kai Po Che. The charismatic actor Kunal Kapoor from Rang De Basanti fame will also attend the festival this year.

Over hundred shorts films were received from all across northeast. The top 10 will be screened at the film festival and the top three winners will be awarded prizes over Rs. 2.5 lakh along with the scope to work with one of the premier directors of national repute.

The Brahmaputra Valley Film Festival was conceived in the year 2013 with the objective of promoting northeast cinema and providing networking platform for regional film makers. The festival also aims to bring in great story tellers under one roof, offering the audience a dynamic experience of cinema, short films, documentaries, culture and performing art.