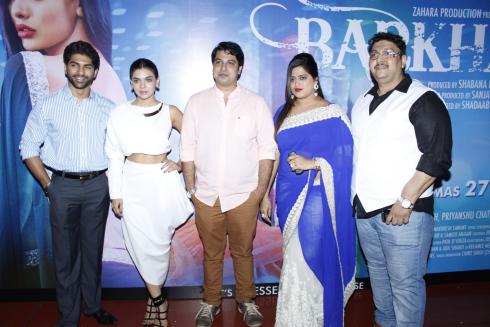 Film Barkhaa premiere show is over in Mumbai’s Cinemax Theater with Star cast and many celebs.

Barkhaa was produced by Shabana Hashmi and Sanjay Bedia under the banner of Zahara Productions. In this film,Sara Loren and Taaha Shah have played the main cast of the film.

Film is full of romance with the twist and turns. Songs of the movie are heart touching.Indeed,the makers have kept the audience in mind while preparing the songs of the film.Sara Loren has given bold scenes in the film shot in beautiful locations across India.

Sara Loren who’s playing the girl named Barkhaa in the film is the main protagonist, and the story revolves around her. “Barkhaa is a women oriented film. Audience will get to see a story based movie after a long time in Bollywood “. The movie is being released by Essel vision productions.