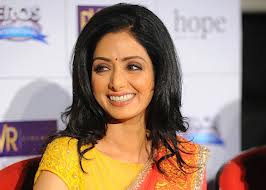 In the past she avoided the media.Now Sridevi is out to hug it.Reports say she is giving interview after interview to promote her upcoming come back film ‘English Vinglish’!.

In fact,it has been more than a decade and half since she was seen on the big screen.With the change of time,the ways to promote films have also changed.

Aware of it this media shy actress is now giving 10 interviews per day.And she has not annoyed any mediaperson so far.