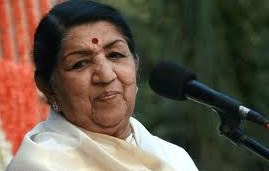 Lata Mangeshkar is under attack.Late playback singer Mohhamad Rafi’s son Shahid has criticized her for issuing a statement that his father had sent her an apology to resolve an issue between them.Shahid has refuted Lata’s claim.He said there is no iota of truth in her claim that she had refused to sing with Rafi and agreed only after he had sent an apology letter to her.”If she stands by what she had claimed she should come out with the letter.”

In fact,in an interview published on Tuesday,she had reportedly said so.This had prompted Shahid to call a press conference on Wednesday to counter Lata’s claim.Though Lata has not reacted to his allegations,Shahid had said that he had felt “strongly”about her allegations as his father during his life time had never courted any controversy.

Reports quoted Shahid saying:”My father was a national property. His fan following is bigger than any artist. If she can prove that my father had written an apology letter to her, then she should come out and produce it. In case she does, I am ready to apologise to her,’ Shahid told reporters here. ‘I think she (Lata) is insecure of my father’s fan following and that is why she has done this.”.

If Lata is a living legend,Rafi was one of the most popular singers of 1950s and 1960s whose hit numbers such as ‘Chaudhvin ka chand ho’, ‘Husnwale tera jawab nahin’, ‘Chhoo lene do nazuk hothon ko’ and ‘Maine poocha chand se’ are not forgotten yet.He who died at 55,had sang duet with Lata such as ‘Yunhi tum mujhse baat karti ho’ and ‘Tujhe jeewan ki dor se’.