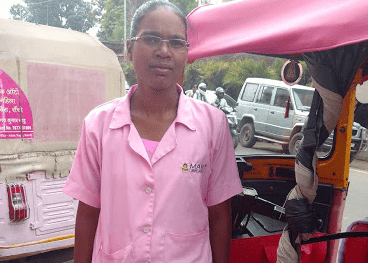 *Pic shows Silwanti Bhagat with her Pink Auto in Ranchi on June 2,2017.

By Rudra Biswas: She drives pink auto,a three wheeler meant for women in Ranchi, and ekks out her living in Jharkhand.Silwanti Bhagat,had gained fame after she ferried a group of celebrities from Bollywood.

The group comprised actress Vidya Balan,film maker Mahesh Bhatt and Director,Srijit Mukherjee from the Birsa Munda Airport,to a Ranchi based hotel.The entire act was part of a special promotional parade for the film Begum Jaan,This was on April 8,2017.

Today,she recalls each of them with a difference.She says she enjoyed driving them.However,she regrets,saying  she never got an opportunity to see the film-Began Jaan.

Shot mostly in Dumka district ,Begum Jaan premiered all over the country on April 14.

" I am on the roads for at 12 to 14 hours every day so that I earn enough to pay the monthly installment of the bank loan taken to purchase this auto and meet the expenses of my family. This is the fate of the other 44 women pink auto drivers like me. Where do we get the time and the money to go to a cinema hall and see a movie ?," Silwanti quizzed.

On April 8,2017,20 pink autos, all driven by women, had participated in a special promo that saw Bgam Jaan linked Vidya Balan, Mahesh Bhatt and Srijit Mukherjee,zipping around in Ranchi by the  pink auto driven by Silwanti who was followed by the other 20 pink autos.

Silwanti's eyes lit up as she recounted this event that turned her into an instant celebrity.She recalls:

" We had been asked by Mahesh Bhatt Sir to come to the airport and participate in a promo parade for the film Begum Jaan. We remain grateful to Sir for his generosity.We were waiting outside the airport for the guests to arrive. The police were making quite a fuss as they saw us in such a large number, though they relented after we told them that we had been invited by none less than Mahesh Bhatt Sir," she remembered with a sense of pride visible on her face.

Soon they landed at Ranchi airport. As they came out of the airport terminus, they rushed into a waiting SUV, dodging the crowd of media men waiting for them. However a little away from the airport, the trio left the air conditioned SUV and rushed into the auto. Followed by the 20 other pink autos,it was a 3 km  long impromptu promotional parade from the airport road to a city hotel.

“ I can never forget that historic moment. My heart began to beat so fast that I feared it would pop out of my mouth as I saw Begum Jaan, Mahesh Bhatt Sir and Srijit Mukherjee sahab, dash out of their SUV to jump into my auto. Bhatt Sir sat beside me in the front while Begum Jana and director Spirit Mukherjee sat in the rear seat.

My hands were trembling, I was perspiring heavily and I was finding it quite difficult to keep my eyes on the road,” Silwanti recalled.

"Begum Jaan (Vidya Balan) was so sweet, so kind, so polite. She asked me how I was. She even praised my driving skills. The cover of the back seat was a bit torn, but that did not bother Begum Ajani wanted to take photographs of my celebrity passengers, but I couldn’t. I handed Mahesh Bhatt Sir, my mobile and he was so kind to shoot several photographs of me and my celebrity passengers", she said.

Composing herself all over again, Silwati revealed that she and all the women pink auto drivers lead a hard life, balancing the long hours of the city roads, with family chores while earning money to fend for their families.

“ Though we carry only women passengers, there are many women who ignore us and are even rude to us. Often, women passengers curse us,we are forced to bear with a smile. Since the male driven autos too ply on our route, the competition is severe. Where do we get the opportunity to see a film?” Silwati asked.

Another pink auto driver, Ash Devi has another tale to tell.“Over the past two years, we have proved that women too can drive three wheeler autos as efficiently as our male counterparts. Yet Pink autos are allowed to ply on two routes- from Main Road to Argora and from Ranchi railway station to Argora. We are not allowed to ply on other routes . This rule is discriminatory for women".