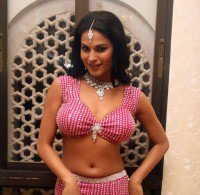 What is common between Pakistani actress Veena Malik and The Dirty Picture fame Vidya Balan?Nothing?Right?Wrong.Both have a common claim to fame.That is while Balan rocked the box office by her awesome performance in Dirty Picture,Veena is set to sizzle in its Kannada version.

Though Balan,who was appointed Brand Ambassador of Clean India campaign,has not spoken about her,Veena in reply to a question by a scribe denied that she had seen Dirty Picture.”I want to go one step ahead in my performance in this(Kannada)film”,said Veena who hit the big screen in India after her stint in controversial reality show-“Big Boss 4”