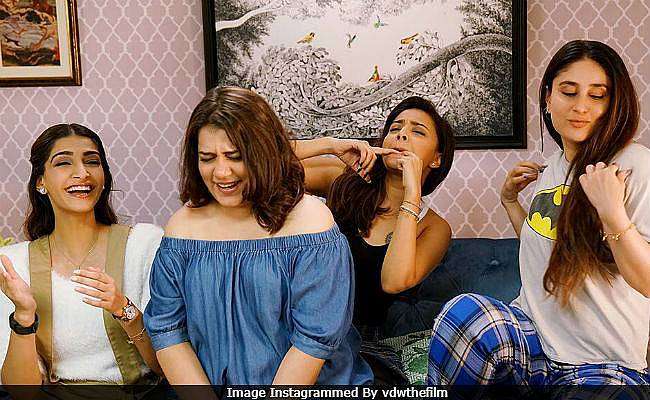 Directed by Shashanka Ghosh and acquiring popular rating of 3.5 stars(out of 5),this film raises one fundamental question-
"Do you know who his mother is?"

As it is,three girls giggle in mock scandal after the fourth girl comes back from an unexpected tryst, and this question is posed to remind the straying girl that she has just slept with the son of a notorious gossip. The query, asked in an unmistakably Delhi vernacular ("You know na uski Ma kaun hai?) mirrors that familiar cliche of North Indian masculinity - "Jaanta nahin mera Baap kaun hai?" - where men play bully by asking others if they know who their father is, as if the asker himself was mildly concussed and had forgotten.

Veere Di Wedding, an all-girl ensemble comedy directed by Shashanka Ghosh and written by Nidhi Mehra and Mehul Suri, subverts the usual and the expected at many a bend. It starts out as a buddy film set in the familiar band baaja baroque world of a Delhi wedding, but there is more to this film than initially meets the eye, and certainly more to these ladies than meets the guys. This is a film that rolls its eyes at 'happily ever after.' It knows weddings are hard, marriages take work, and that, occasionally, pampered princes need to be knocked off the moon-shaped thrones picked out by their mothers.

When we first meet the four heroines, they're in school uniform. Theirs is the kind of early sisterhood that predates judgement; they are friends first, before being battered by world and circumstance into becoming the adults they become. Like us, all four characters are dysfunctional and broken in their own way, but they are honest and unmerciful, committed to each other. They derive their fierceness from being a unit. We can sit near them, but - to borrow from Tina Fey's Mean Girls - we can't sit with them.

They don't know what they want. Sakshi is a flamboyantly wealthy brat struggling with a divorce who likes her drinks straight-up, Meera is an exasperated mother who is only too glad to leave her Batman-pyjama'd child in more grown-up hands; Avni is a divorce lawyer who really (really) wants to get married; and Kalindi, on the other hand, is the child of an oddly broken home, preparing to tie the knot while not believing in it.

The film starts off far too loud, with incessant and overdone background music and sound effects to try and tickle audiences. This makes Veere De Wedding feel, at first, like a bad sitcom, which is not just at odds with the authentic performances but occasionally makes them appear less subtle than they are. Shikha Talsania and Kareena Kapoor perform impressively - and casually - enough to cut through this cheesy treatment, but the film's style initially makes Sonam Kapoor and Swara Bhasker appear a bit broad, even though all four characters play off each other very well.

The writing is assured and nuanced, with telling details about these girls, their men, and their families. After a while as the over-the-top background sounds settle - or we get used to them - the film's cleverness becomes apparent. Veere Di Wedding lands several blows to the patriarchy while never giving up its masala entertainer roots. It is the kind of film that needs to work because of what it says.

It is a film that features a nonchalantly, openly gay couple, but not an eyebrow is ever raised and there isn't a whiff of homophobia. It is a film where a girl lying about a phone call says it was Airtel, that relentless spam provider we have all been struck by. It is a film where a bride is amused by her choreographer, and later, when she's caught downing a few glasses by the wedding cameraman, she doesn't miss a beat when asking him to delete it later. Right now she's drinking, and that's what matters.

Here, a striking girl is repelled by an obnoxious young man. She is appropriately mortified by his opening question - "Are you from Khalsa College?" - and doesn't care to find out his name, referring to him, dismissively, by his last name, 'Bhandari,' saying it as if he were her upholsterer or property dealer. Yet there are some of her itches even this man without a first name can scratch, and this film and the girl are brave enough to acknowledge that.

The casting is clever and spot-on. Kareena Kapoor is terrific as Kalindi, waking up and forgetting which hand the ring finger is on. She, the most mainstream of heroines - in this irreverent, family-hating part - gives this foulmouthed film new subversive meaning, while giving audiences something surprising. Shikha Talsania's disgruntled Meera brings warmth and believability to the film, and the immensely likeable actress never hits a false note. I really look forward to seeing her in more films.

Swara Bhasker plays against type as the party girl, Sakshi, in too-short dresses and too few inhibitors, chided for her language even by her friends. Her character seems too cartoonish in her nastiness - in comparison to the other girls - early on, but Bhasker makes them earn her affection. It is once Sakshi comes in for the group hugs that they begin to matter. Sonam Kapoor admirably plays the most messed-up girl, Avni, one who likes saying things like "no sex before the ring ceremony" but likes also to be goaded into 'climbing aboard' new young men by her friends. Kapoor is at her most natural, and many will take this candid performance as proof that this is what the actress must really be like. What better compliment is there?

The cast is solid all around, but other performers I'd single out are Sukesh Arora as Keshav, a silent and stylish man who speaks volumes with his eyes, Vishwas Kinni who makes Bhandari both unmistakably loutish yet vaguely charming, Sumeet Vyas as the groom who used to think only his mother was crazy, and Ekavali Khanna as a stepmother with an alarmingly loud cackle.