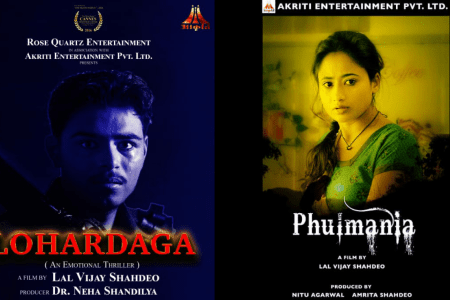 Believe it or not, a Jharkhandi film Phulmania has left its mark in the 72nd  International Film Festival 2019 at Cannes. Now it is about to hit the theatres in the state before Durga Puja, it is learnt.

Phulmania, a Nagpuria film, was directed by Lal Vijay Shahdeo,a fine theatre actor turned director who is a resident of Lohardaga, Jharkhand.

Phulmania shows the native culture of Jharkhand's popular language-Nagpuria having a storyline and folk songs.

Shahdeo claims that this movie is based on a horrific social reality connected with witch hunting. The film's central theme is this social evil still prevalent in the state. Apparently, with an aim to educate and spread awareness, the film deals with the issues of gender equality and infertility narrated from a woman’s perspective.

It tries to connect to its audience at an emotional level. Contrary to movies based on a social cause, Phulmania is infused with entertainment and can be classified as a commercial drama as claimed by the director. “It is a new age film breaking the stereotype around Nagpuri films and strives to connect to a large audience,” says Shahdeo.

The production unit has confirmed its release in both Hindi and Nagpuri version and is expected to cover all the major cities of the country as well. “It has got a fabulous response at the film festival and is a groundbreaking step towards promotion of indigenous films at the international level,” said the director who represented two of his films at Cannes this year – ‘Lohardaga’ and ‘Phulmania’.

The film, with a running time of one hour twenty minutes, is shot in Ranchi and its outskirts and has a swift transition from the rural to urban set-up.

The character of the protagonist is played by Komal Singh, from Ranchi and the film also stars Hansraj Jagtap, a National award winner from Maharashtra. Ravi Bhatia, Rina Sahay, Sunny Sharma, Monica Mundu are some other artists in the film.

The music is directed by Nandlal Nayak and carries the essence of folk music of Chotanagpur. One of the songs, catching attention is done by Padma Shri recipient Mukund Nayak.

With a phenomenal response at the festival, Phulmania has received a major demand from China and Indonesia. The production is in negotiation with the Chinese for selling the rights.