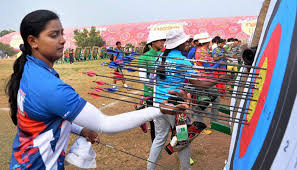 From Tata Steel to Bharat Petroleum has been a long journey travelled by Padma Shri ace archer Deepika Kumari during the past over a decade.

Deepika  who has resigned from Tata Steel and ended her association with the company from 11 years,is going to join Bharat Petroleum Corporation Limited (BPCL) at Pune in August this year,it is learnt.

Already Deepika,who has been a winner of the prestigious  Arjuna Award (2012) has thanked Tata Steel for its support in her professional career.Records show that she had joined Tata Archery Academy in 2008 and had made many records.Now,while she is in advance age,she is expected to do still more and help Bharat Petroleum  make her brand ambassador.

Deepika is on record explaining that she is joining Kolkata office of Bharat Petroleum mainly because her husband Atanu Das was based in Kolkata.And,as such,now both of them can stay together.

Also,Deepika,a former world junior champion and double gold winner in the 2010 Delhi Commonwealth Games, has saluted Tata Steel and opined that the values and support system of the Tata Steel helped her hone skills and perform better.