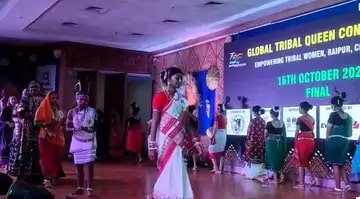 For the first time, the capital city of Raipur in Chhattisgarh witnessed the Global Queen Tribal Award programme. Its aim was to showcase tribal beauty in tribal dresses and costumes.

Tribal dresses are a personification of two words- bold and beautiful. From striking prints to electric colours, these were used by tribal girls who excellently participated in the programme, highlighting their varied cultures, from different areas of the country- India.

When these beautiful Adivasi girls walked on the ramp, Jharkhand’s beauty queen Pooja Lakra caught the attention of the audience.” She looks amazingly smart when she eyes the cameras”, commented Dhikhar Mundu, a film-maker in the making who was present there.

Mundu told JharkhandStateNews that he had never ever watched fashion show of tribal girls. “ One was carrying peacock leaf, another cock’s feather. Another one had tattoos on her hands. Yet another carried coin garland,” he pointed out on phone.

Famous Gond tribal beauty Balod Parwati Korram was spotted wearing traditional hard tempest.” Since our ( Gond)ancestors were hunters, archery type tattoos were tradition. We get arrow shaped tattoos done on our body with a sense of pride”, Korram is quoted having said in a report published in Bhaskar.com.

Two organisers - Dr Chddatmika Khatua and Dilip Mohanty- informed that the programme was aimed at boosting self-confidence among tribal girls and providing a platform to move forward with a sense of pride.” Our effort is meant to promote tribal girls so that they can present their culture before the world.”

Several rounds of walks on the ramp in traditional tribal costumes were held and then winners were selected. Haryana-based Suman walked in traditional Hariyanwi dress and tried to exhibit impartiality and discrimination suffered by girls.

Jharkhand-based Pooja Lakra was declared victorious. She was given Rs 51,000 cash award.

Now, organisers informed that there is a plan to organise fashion show of girls from indigenous tribal communities of 162 countries.

A random interview conducted among girl participants from Sarguja, Bastar, and Rajanandgaon brought to light that their costumes, tattoos and jewelleries were made of natural products such as wood and fowl.

Notably,the craze to wear these products by tribal girls was as much as other non-tribals have for gold and diamond.