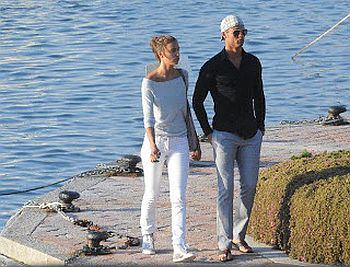 Cristiano Ronaldo has rubbished reports alleging that he had cheated his model girlfriend Irina Shayk.The Mirror reported that Brazilian model Andressa Urach had a ‘fumble’ with him “that went on for hours.”Both Urach and Ronaldo had dubbed the reports as fiction and forgery.

Though Ronaldo wrote on his Facebook account that he was deeply outraged by the situation that was intended, in vain, to affect his personal life,he has attracted many within the female audience and dated some of the most popular women in the world.

Irina Shayk is Cristiano Ronaldo current girlfriend, and she is a Russiansupermodel, born in 1986 (27 years old and 1 year younger than Ronaldo). Her full name is Irina Shaykhlislamova, and she became very famous after a photoshoot made for the Sports Illustrated Swimsuit Issue in 2007 and 2011. In 2007, Irina also replaced Ana Beatriz Barros as the face and cover girl of the known brand Intimissimi. Since May 2009, Irina Shayk has a signed a representation contract with IMG, a modeling agency