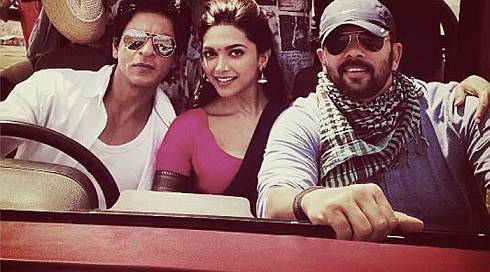 Chennai Express is a romantic comedy film starring Shah Rukh Khan and Deepika Padukone. It is yet to hit the box office but a trailer is out. Rohit Shetty has been working hard to give it a form that is welcomed by the audience.

In the Indian Express a story said: Khan known for his dedication is camping in Wai with director Rohit Shetty to complete the shoot of his next release Chennai Express . He aims to complete the film on time for Eid.

SRK and Rohit have a fun ride with Deepika Padukone, who is paired opposite Shah Rukh after Om Shanti Om. This image published by the Indian Express was posted on Twitter by UTV stars.