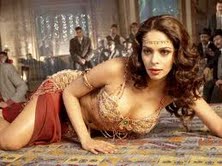 If you want to learn how Bollywood siren hogs the spot light by talking about her sex organ,read Mallika Sherawat’s latest one liner.

But consider her past record first.When she had just hit the B town scene years ago,she had hit the headlines by reportedly saying:”Men only talk about my breast.”

Now,she talked about her milk feeding gift by God while viewing some scenes of her recent film-Kismat Love Paisa Dilli.

”The cast and crew of the film were watching it with director Sanjay Khanduri when Mallika spotted Neha Dhupia (who has done a cameo in the film) in one of the scenes. It had her sari pallu falling off with her face not too visible”,said Mid Day adding:”On seeing this Mallika declared, ‘These are not my breasts!’”.