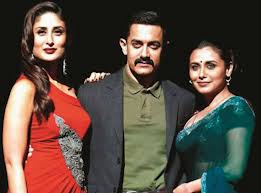 Yet again Aamir Khan is going to rock.This time he plays the role of an investigative officer Shekhawat.The film is Talaash starring Aamir,Rani Mukherjee and Kareena Kapoor.

Talaash,a product of Reliance Entertainment,depicts life of Mumbai under the red light.It’s a story of love,attraction and endevour to solve a crime with a fine mix of suspense.

This movie is slated to be released on November 30.A review of the film says that the story “turns into a life altering chase for Shekhawat when he is forced to reel under the repercussions of a broken married life with wife Roshni played by Rani Mukherji and come face to face with his suppressed grief. “

The review by Bollywood Hangama.com says”Being on his investigative quest and fighting it out with personal struggle, Inspector Shekhawat meets a sex worker Rosie played by Kareena Kapoor who further adds shades of mystery to the puzzle.

What looks like a simple car accident investigation turns into a haunting mystery as further investigations show many anomalies were stringed to the death of the victim.”