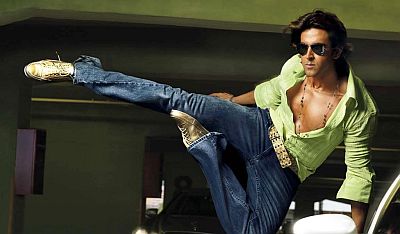 Toys and Hrithik Roshan.A mix of the two can enter into the Guinness Book of World records,according to a byline report by Shaheen Parkar in Mid Day.

The report says that Hrithik who is known for his body and mind,is about to add another feather in his hat.

”Now he will add one more in an attempt to help create a world record. As part of his role of being paired with a global toy manufacturer, an event is being held on December 4 at a mall in Goregaon.
The star will be unveiling an over 25 feet tall play station containing diecast toy cars and tracksets where kids can indulge”,says Parkar.

Quoting his own sources,Parkar writes “The makers feel this is the tallest-ever play station made for children. Hrithik’s presence will add an aura as they take a shot at fame. The Guinness folk will be present to record the event and see if it makes it to the book.”