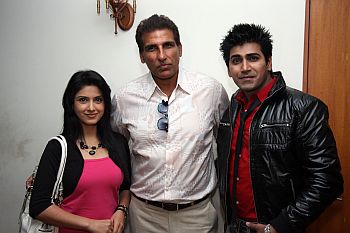 This is what Singer Kailash Kher said when he heard the music of the film 2 Nights in Soul Valley during its launch event. After unveiling the music when he spoke to media about his long and friendly association with PRO Harish Sharma, who has directed the film, he made a special mention of its music.

Kher said, “Harish Sharma has been with me as my PRO since the start of my career and the association continues even today. Sharma as a PRO has made it big and Sharma’s venture into field of Direction also promises to gain him equal credence. I forward him my best wishes and all the support.”On asking if he liked the music of the film he said, “Music of the film scared me.”

Adding further he said, “The film being a horror film the music not just scares you, it creeps within and send chills through your spine but maintains the melody factor as well.”Kher, if could not sing for Sharma’s debut film yet promised that he would be singing in Sharma’s next.

On the occasion Harish Sharma said, “Music is an important part of any horror film and I have made sure that the film of my music is not left out on that essential element. The music of the film is spooky and melodious all at the same time.