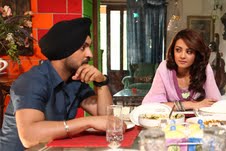 He is the real Sardar,a versatile actor and singer and his upcoming movie “Saadi Love Story” is set to be released on January 11.

An eminent name in Punjabi film industry Diljit is a passionate singer and a trend setter. His album Dil was a smashing hit and it initiated the trend of dancing numbers with his hit Punjabi tracks.

Taking his talent a step ahead, he tried his luck in acting. Diljit proved once again that talent transcends borders and came across as an epitome of talent delivering films like Mel Karade Rabba (Cameo), The Lion of Punjab, Jihne Mera Dil Luteya, Jatt & Juliet as an actor. Diljit spoke to us about his next Punjabi flick “Saadi Love Story”, following are a few excerpts-

Tell us something about the film.
The film is made under the banner of Eros International and Jimmy Sheirgill Productions. It is a romantic comedy and the story revolves around a girl named Preeti who is waiting for her Prince charming. But to her surprise not one but two guys are standing at her doorstep claiming to be her prince charming. The film is about the dilemma that Preeti is in. Comedy ensues thereafter.

What is your character in the film?
I’m one of the guys who arrive at Preeti’s house claiming to be her life partner.

How was the experience of working with Debutant director Dheeraj Rattan?
Dheeraj is a very intellectual man and knows what he is doing. This might be his first movie as a director but he has done many films as writer previously. Working with Dheeraj was great and I would say that he going to leave a mark as a director.

You are once again working with Jimmy, how does it feel?
I have worked with Jimmy in Mel Karade Rabba, though it was only a cameo but since then I have known Jimmy and he is professional when it comes to work and a great person to work with.

How was the chemistry between you and Surveen Chawla?
Surveen is a very good actor and working with her was my pleasure. Surveen is the kind of girl who will give her 100% to whatever she does and this on the other hand gives the other stars the motivation to work harder.

Tell us something about other co-stars.

The star cast of the film includes Surveen Chawla, me, Amrinder Gill and Neetu Singh. We all had a great time during the shoot.

What, according to you, is the crowd pulling X factor of this film?
Life is full of worries but when you need recreation you go to the movie hall for entertainment. This film is that, plus you will laugh your heart out and forget about your worries for at least few hours. It’s a very sweet and simple love story with lots of humor.