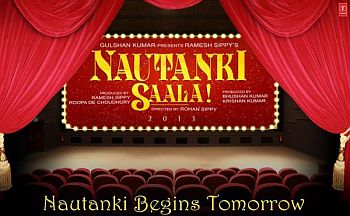 Sippy,Bollywood film maker,is innovative.This he had proved long ago when he had come up with the famous film ‘Sholay’.

Now when he is on way to make a new film starring Ayushmann Khurrana and Kunal Roy Kapur,he had used a scene of Sholay to promote ‘Nautanki Saala’.This film is based on a script of a comedy.

So in his bid to promote it,he made Ayushmann standing near a hoarding on the busy link road in Andheri in Mumbai with Kunal on the billboard.

Later,he addressed the press saying:”This thing was done only for promotions.The idea of having this famous scene from ‘Sholay’ just came randomly and we thought to use it as this would help grab eyeballs,” Director Rohan Sippy told the media informing that the scene will not be a part of the film.