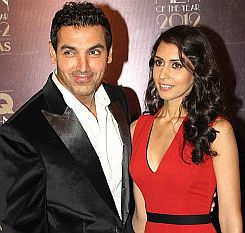 This year’s most celebrated rumor doing the rounds in Bollywood is that John Abraham is going to get engaged with investment banker Priya Marwah in April.The wedding may take place next year.

Reports said John was seeing Priya after he and Bipasha Basu, his erstwhile girlfriend for almost a decade,parted ways.Incidentally,both John and Marwah have neither confimed nor denied the rumor.

A report said that when John celebrated his 39th birth day with his family in Los Angeles on December 17,Priya was there too.

Priya,a US-based investment banker,and John may get engaged in April only to get married later,said the report.