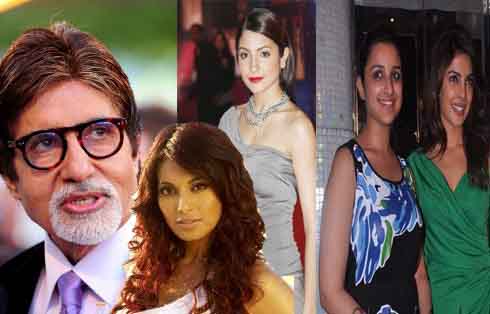 The ANI story on Big B today made a wave in the Bollywood.Reason?

It made public what Amitabh Bacchan had tweeted after receiving the ‘Star of the Century Award’ for himself and another award for his son Abhishek for his role in “Bol Bachchan”at the Stardust awards on Saturday.

Big B tweeted as follows:”So seems like everyone is keen on Stardust awards… here it comes, Abhishek for ‘Bol Bachchan’ best actor comedy/romance. And one slightly tall gentleman who has been around for 44 years got Star of the Century Award.”

“Abhishek in New York for shoot, so I went up for his too… double trouble tonight (Saturday)! They asked me to dance to ‘Jumma Chumma’ (from the film ‘Hum’). I asked during ‘Jumma…’ who do I have to kiss? And all the lovely ladies in the front row ran up the stage – guess who?

“Vidya, Priyanka, Parineeti (Chopra), Anushka(Sharma), Bipasha (Basu)…and I gave them all a peck. It’s been a generous day,” he further tweeted.