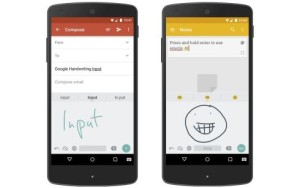 Those who are fond of writing have something to cheer about. After YouTube launched support in 15 languages, Google has launched a handwriting app for Android phones which will work in 82 languages. It lets users write text on their mobile or tablet as an extra input method for any Android app.

The Google app works in 20 different scripts and you can write on your screen using your finger or a stylus.
Google has also designed a new app to test your on-screen penmanship. Called Google Handwriting Input, the app allows the users to ‘write’ on a smartphone or tablet screen. It automatically interprets letters from 82 languages and transforms them into standard digital text. The users can use their fingers as well to write.

“Using handwriting as an input method can allow for natural and intuitive input method for text entry which complements typing and speech input methods,” Google’s research team wrote in a blog post recently.