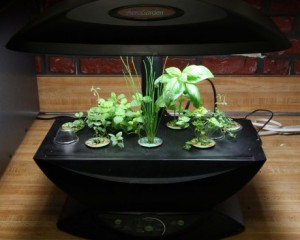 Now,the commonly used alternatives to soil are media such as gel,perlite,gravel, coconut husks and so on.These media are enriched with carefully calculated amounts of nutrients and quantity of water considered optimal for the growth of crops and vegetables.

The latter allows the plant parts to absorb 100 percent of the available oxygen,carbon dioxide,water and nutrients; and according to reports,the water usage is 65 percent less than the hydroponic systems. The nutrient usage also reduces by about 25 percent.

Other advantages are: Water used in the system can be re-used. Wastage of nutrients can be curbed since plants are better able to absorb them. Excess nutrients do not go into the system, so, there is no pollution due to nutrients. Yields are comparatively high and stable. Controlling diseases and pests is easier due to the fluid nature of the medium. But, there are a few disadvantages as well: High moisture content of the medium may cause moisture-associated diseases in plants. Any chemical disturbance in the system may result in the death of the plant since soil is not present to act as a buffer.

Aeroponics is used by NASA,in its programs entailing study on growth of plants and the production of food in space,to check the disadvantages of the hydroponic systems.Furthermore, aerosols are easier to handle than liquid water in the microgravity environment of the space shuttles and the space station.

Scientists are now researching the best ways to grow plants in space for food, to help recycle the air for breathing and also for psychological benefits to the space-explorers. It’s Lada Validating Vegetable Production Unit helps study if the crops grown in space are safe for consumption, the growth of micro-organisms in space and their effects on the plants and hardware.

Also,research is on to use the same method to maximize productivity.Scientists have grown peas, lettuce and radishes in their space garden. They have also experimented with corn, soybean, and so on and have compared their results with the control sets that were grown on Earth under proper effects of light and gravity. An interesting result was found as an outcome of these experiments. Due to micro-gravitational conditions in space, the plants developed twice as fast compared to those on the home planet.

The fertilizer and water uptake by plants was also better and this led to lower salt accumulation. The water that is used for growing plants is the byproduct of the fuel cells. The plants harvested in the space station are preserved in the space shuttle freezer and brought back to earth for analysis.

These methods of growing plants are said to benefit the future space explorers and the results of these investigations might help the agricultural systems on earth and help farmers grow better, healthier, and larger amounts of crops in small spaces.