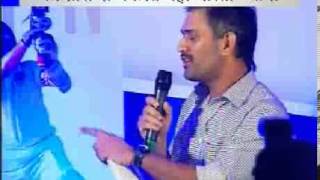 Dhoni is no strange case.Many young men and women have been facing the problem of grey hair.

The reason could be many.But in an article in abc science(abc.net.au)Bianca Nogrady says that stress may be a cause behind your grey hair.

The article published in abc.net.au on June 10 said as follows:

“Sign of the times: Grey hair during ageing is the result of exhaustion and loss of melanocyte stem cells, so a similar mechanism could be at play with stress-related greying(Source: sturti/iStockphoto)

The appearance of grey hairs after periods of stress or skin damage could be the result of depletion of stem cells from the base of the hair follicle, according to a new study in mice.

The study, reported in Nature Medicine , may also point to new “