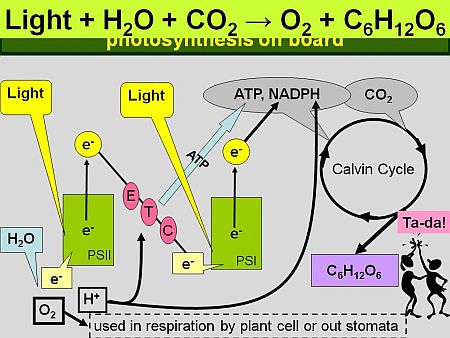 Our dependence on fossil fuels has severe long term consequences. One of the ways to reduce this dependence on fossil fuels is to move over to non conventional energy sources and create fuel producing artificial systems that are both cost-effective and environment friendly. These range from harnessing green energy from algae in the form of algal bio-diesel to more widespread solar, wind and hydro energies.

During the process of photosynthesis, an electron jumps from its ground state to a higher energy state due to the absorbance of sunlight. This process converts the light energy into chemical energy that is utilized by plants. Efforts are being made to capture these energy rich electrons as they jump into a higher energy state and are carried away by a protein to facilitate the process of photosynthesis further. These electrons could be a way to generate green electricity directly from plants since electricity is basically a flow of electrons.

Researches at Stanford University have successfully generated an electric current by making use of the photosynthetic system of the algal cells.

“We believe that we are the first to extract electrons out of living plant cells,” said Won Hyoung Ryu, the lead author of the paper published in the March issue of the ‘Nano Letters’. They made use of a nano-electrode made of gold and inserted it into the living algal cell membrane. The electrode then collected the electrons that had been excited by sunlight and a tiny electric current was thus generated.

The research is still in its early stage and only single-celled plant like organisms have been utilized till now. The byproducts of photosynthesis are oxygen and protons, so, carbon dioxide; a green-house gas is also not released.

According to Ryu, “This is potentially one of the cleanest energy sources for energy generation. But, the question is, is it economically feasible?”