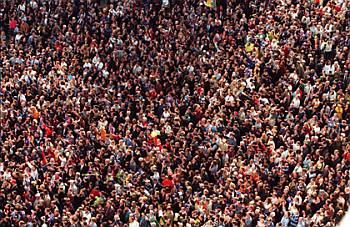 Can you estimate the population of the world in 2100 ?

A United Nations report made public on June 13 expects,the population to reach nearly 11 billion by the end of the century.

“That’s about 800 million or about 8 percent more than the previous projection of 10.1 billion, issued in 2011”,says an article published in Science Daily. The projected rise is mostly due to fertility in Africa, where the U.N. had expected birth rates to decline more quickly than they have.

The Science Daily quotes Adrian Raftery, a professor of statistics and sociology at the University of Washington saying, “ The fertility decline in Africa has slowed down or stalled to a larger extent than we previously predicted and as a result the African population will go up.”

No bonafide body had projected the population of the earth at the beginning of this century.But the new U.N. estimates, using statistical methods developed by Raftery and his colleagues at the UW Center for Statistics and the Social Sciences. The group’s improved fertility forecasting methods combined with updated data collected by the U.N., were used to project the long-term consequences of the fertility change in Africa since the last population estimate two years ago,says the Science Daily.