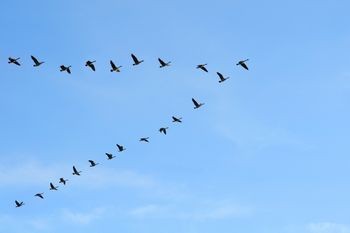 Every body knows that millions and millions of birds make heroic journeys guided by Earth’s magnetic field.But the question as to how they detect magnetic fields has puzzled scientists for decades.

Now in an article based on the Keays lab at the Research Institute of Molecular Pathology in Vienna has added some important pieces to this puzzle.

“Their work, published in Current Biology, reports the discovery of iron balls in sensory neurons. These cells, called hair cells, are found in the ear and are responsible for detecting sound and gravity”,says an article carried by Science Daily.

It adds:” Remarkably, each cell has just one iron ball, and it is in the same place in every cell.

“It’s very exciting. We find these iron balls in every bird, whether it’s a pigeon or an ostrich” adds Mattias Lauwers who discovered them “but not in humans.” It is an astonishing finding, despite decades of research these conspicuous balls of iron had not been discovered.