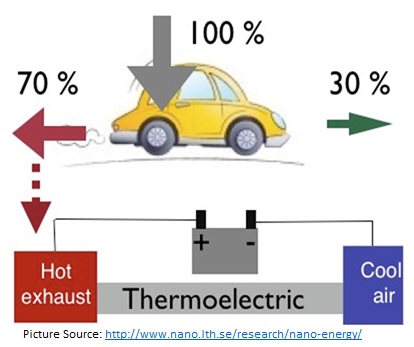 Nearly two-thirds of the energy input in the form of fuel gets lost as heat.Now scientists from Northwestern University have developed an environmentally stable thermoelectric material that has been termed as the best in the world and can convert 15-20 percent of the waste heat into electricity. The current thermoelectric materials have a limited commercial usage due to their inefficiency.

“Our system is the top-performing thermoelectric system at any temperature,” said Mercouri G. Kanatzidis, who led the research and is a senior author of the paper. “The material can convert heat to electricity at the highest possible efficiency. At this level, there are realistic prospects for recovering high-temperature waste heat and turning it into useful energy.”

“People often ask, what is the energy solution?” said Vinayak P. Dravid, one of Kanatzidis’ collaborators and a senior author of the paper . “But there is no unique solution—it’s going to be a distributed solution. Thermoelectrics is not the answer to all our energy problems, but it is an important part of the equation.”

It is assumed that it might have a future of widespread adoption in various industries possibly including automobile industry (a lot of potential energy of the fuel is lost through the vehicle tail pipe), heavy manufacturing industries like coal and gas fuelled ‘power-plants’ and in large combustion engines present in ships and tankers.

They usually have a very high temperature ranging from a few hundred degrees Fahrenheit to a few thousands and that make them an ideal spot for the use of thermo electrics.

Thermoelectrics presently have many uses. But the latest invention is going to surpass the performances of the predecessors. As of now, Curiosity, the Mars rover is powered by a less efficient form of the lead telluride thermoectrics and automobile manufacturer BMW is also testing it in its vehicular exhaust pipes.