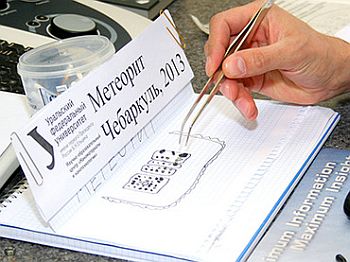 After the meteorite blast that left more than 1200 people injured,it is rush to find its framgments in Russia.

The rush to pick up the particles of the burnt meteorite was visible in and around the city of Chelyabinsk,1500 km from east of Moscow,where people divided in groups were combing the land scape full of snow and ice,according to reports.

Reports say value of the particles could be as high as 60,000 roubles($2,000)per gram-more than 38 times than the current cost of gold.

The BBC reported that fragments from a meteorite have been found around a frozen lake near Chebarkul, a town in the Chelyabinsk region.

The BBC quotes Viktor Grohovsky of the Urals Federal University as telling Russian media that the material found contained about 10% iron.