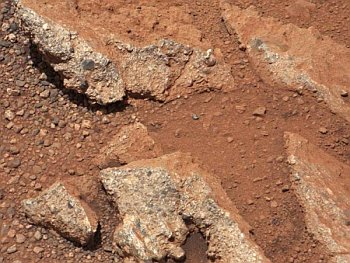 In sciencemag.org,Govert Schilling has authored an article on -Are we Martian After All?.There is no consensus on this question,but he argues that if any body looked in a mirror,he or she have seen a descendant of creatures from Mars.

I agree with him.

“That is, if biochemist Steven Benner of the Westheimer Institute of Science and Technology in Gainesville, Florida, is right. ‘Life started on Mars and came to Earth on a rock,’ Benner declares. Today, at the European Association of Geochemistry’s Goldschmidt Conference in Florence, Italy, Benner made what many in the origin-of-life debate call an interesting, but not convincing, new case for our martian heritage”, he writes.

He adds this in his article:

” However and wherever life began, one thing is sure: Its first organic building blocks, called hydrocarbons, had a number of hurdles to clear before evolving into living cells. Fed with heat or light and left to themselves, hydrocarbons tend to turn into useless tarlike substances. And even when complex molecules like RNA (most biologists’ best guess for the first genetic molecule) arise, water quickly breaks them down again.

Benner argues that those chemical hurdles would have been lower on early Mars than on young Earth. To begin with, early Earth was probably a water world, completely covered by oceans, but water covered only parts of Mars’s surface. Moreover, he notes, rocks on Mars had a stronger oxidizing effect than rocks on Earth, so oxygen-bearing molecules would have formed more easily there. “This is established by observations today on both planets, as well as by models for how planets form,” he says.

As a result, molybdates—molecules that contain molybdenum and oxygen—could have existed on Mars, but probably not on Earth. Like oxidized boron (which occurs in dry regions and would also have been rare on a water-covered early Earth), molybdates tend to prevent organic materials from turning into tar. Benner says laboratory experiments show that molybdates can convert certain organic molecules into ribose—an important component of DNA. “This is a fact,” he says.

That would make it more likely that life originated on our planetary neighbor, Benner says. Martian microorganisms could have reached Earth on meteorites, flung away from the Red Planet’s surface by cosmic impacts.

Benner’s hypothesis “is a neat idea, but not yet proven,” says biochemist William Bains of the Massachusetts Institute of Technology in Cambridge. Some theories for the origin of life do not need molybdenum at all, Bains says, and scientists don’t know for sure whether early Earth was completely covered in water while early Mars was not.

Astrobiologist Paul Davies of Arizona State University, Tempe, agrees that Benner’s argument “greatly strengthens the case” for Mars as the first home of terrestrial life. But, he adds, “It comes down to probabilities. The case is suggestive but not overwhelming.” Even if early life existed on Mars, he says, it would be hard to prove that those life forms planted the seeds of our own existence. “In fact, because the traffic of [meteoritic] material between Earth and Mars is so prolific, once life gets going on one it will be transferred to the other very quickly, making the place of origin almost impossible to discern.”

Astrochemist Pascale Ehrenfreund of George Washington University in Washington, D.C., is a bit more optimistic about resolving the issue. Laboratory experiments under conditions that resemble early Mars might lead to realistic answers, she says. But she doesn’t find Benner’s “interesting idea” convincing.

Benner himself concedes that scientists may never know how and where life emerged. “We will likely need to be satisfied with answers to a more indirect question: How might life have emerged?” Finding martian life, either extant or extinct, could help by revealing information about ancient martian biochemistry. “This could lead to an ‘Aha!’ moment that opens new thinking relevant to the historical question.”

As for pinpointing the location of the origin of life once and for all, Benner quips, “Building a time machine will help,”notes the author Schilling.

The argument is strong and convincing.

Note:Author of this article Govert Schilling and the sciencemag.org where the article was published is a reputed science journal in the world.

Life’s cradle? According to biochemist Steven Benner, life on Earth may have originated in martian rock samples like these.Courtesy:news.sciencemag.org