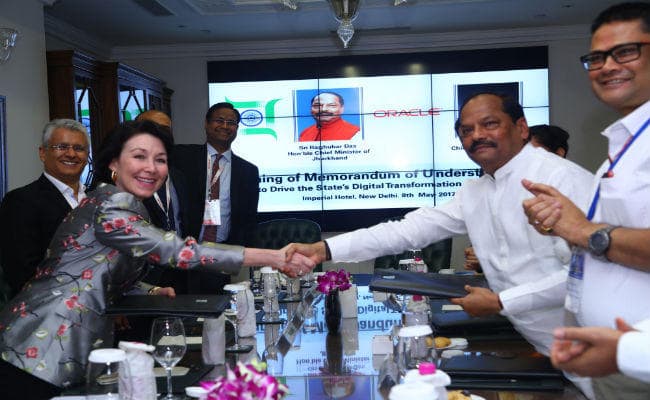 Picture shows Chief Minister Raghubar Das shaking hand with Oracle Corp officer after the MoU was signed in New Delhi on May 9,2017.

Yet again a MoU was signed by the Jharkhand government and a private company.This time the private company is Oracle Corporation.The aim was to  leverage Information Technology (IT) for good governance in Jharkhand.

In New Delhi today,Chief Minister Raghubar Das signed a Memorandum of Understanding with Oracle Corp. for giving boost to digital transformation, particularly to improve citizen services and promote start-ups in the state.

"The focus of the tie-up will be on encouraging innovation and entrepreneurship among youngsters and supporting start-ups",said an officer of the state IT Department.

Later Das addressed media persons and talked about the work being carried by his government to facilitate implementation of 'Digital India' programme of the Centre led by Prime Minister Narendra Modi.The press conference was jointly organised by the state government and Oracle officials after signing of the MoU ended in the national capital.

Das also said that the focus of his government is on skilling youngsters in the IT sector and it had asked Oracle to open an innovation centre in the state. He added that IT intervention will help in reducing corruption and the role of middlemen.