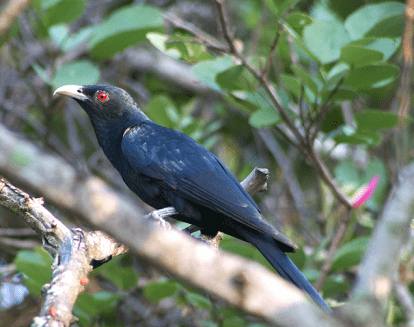 Many people use alarm bell to wake up in the morning.I get up after hearing Ku-Koo call raised by Jharkhand state bird-Koel.

Every morning when awake,clock shows it is 5 A.M.This makes me thank the natural clock system equipped Koel whose Ku-Koo call is on time,a feature common to many living species.Even my Chikoo and Tofee,two dogs who sleep near by bed room,get up around the same time.This reality unfolds in my house in Shivpuri,Kanke Road,Ranchi,capital of Jharkhand.

Feel happy and fortunate to have Koel around the top of trees planted by me in the locality.Even in villages and forest areas of Jharkhand,Ku-Koo sound of this superb birds co exist with humans.However,the scene was different in many urban pockets where forest had disappeared and concrete jungle had been causing noise and dust pollution.

In any case,though these dogs who remain awake in the night have been time bound,none of them is as punctual as Ku-Koo call of Koel.As it is,this magnificient bird is 15-18 inchs tall. Its maximum weight is 190-327 Gms.
indiamapped.in writes:

”The male bird of Koel race generally of the dark black color, the beak of the bird is of greenish grey color while feet are of pure grey color. Just opposite to this, female bird of this race is having the brownish color with small bill of black or brown color. On the wings of female Koel, there are spots of white color are also found in some of the areas.”

Pictures talken by www.jharkhandstatenews.com revealed that upperparts of Koel is black (male)and  brown (females) but under parts are different in design and color. “Body part is of brown color and feathers attached to wings are spotted till the neck collar”,said indiamapped.in.

It adds:”Every body knows that cuckoo is a vocal bird while in their breeding period. This bird has the capability to create more than 13 calls at a time. All the calls may vary according to the population of the area but still the most common call of a Koel is Ku-Koo.

Its tail is sufficient long and has a cut like crossed lines. This feature supports in taking heights during flying as aerodynamic body shape take a steep climb against the air. Beak of this bird is slightly bent at the tip and much harder in comparison to other birds. Hard bone is well connected with the bill and designed in such a manner so that a lower jaw is fixed and upper jaw is moving.

A red eye with round shape having a small retina inside is additional beauty feature of this bird. Head, neck and throat portion of this bird are full of black glossy feathers with white spots and shades on borders. Feather on wings are arranged in aerodynamic manner to provide maximum ease and stability during flight.

Fingers of the legs are bent towards inside to make a firm grip on the object during sitting or carrying any material for making nest. Bill of this bird is the smelling arm as well as weapon against its preys.  Every Indian is well familiar with the call of this lovely bird. In the summers, Ku-Koo of this bird creates a charming and cooling atmosphere in gardens while hot and harsh winds are firing. Male Koels are generally better in making calls in fine tune however female birds are also having fine voice but naturally, the sound speed with intensity and frequency, of male birds are better.

The Asian Koel is found in all over the countries of this continent. Middle East, Gulf countries, Pakistan, India, Nepal, Bangladesh and other south East Asian nations are the main habitat of this bird. Except the main land, this bird is also finding in Andaman and Nicobar Island.

In Singapore, the first Koel pair was witnessed in 1980. In India, all the states whether high altitude or lower parts of the country, all are the natural habitat of this beautiful bird. Plain areas and hilly areas both have the same bird with a little difference. Trees, outside and inside the houses, holes, uprooted trees, shelters created by human being on their dwelling units are some of the favorite spots for residing of this bird.

Koel is shy natured bird but as far as aggressiveness is concerned this aspect is restricted upto the small circle. By default, this bird is not aggressive. For food, Koel can go a long but this bird does not quarrel if the food is in the hands of another bird. Making nests is another activity of Asian Koel. Leaves, sticks, polythene corners, and other materials which are necessary for making nest are beautifully arranged by Koel. This bird is closer to a bird Baya in making the nests.

Baya has all the arrangements made in the nest even the swings for young birds coming up or already in the nest. It is experienced from researches that in a span, Koel makes a call of four Ku-Koos. Diving with smartness is another ability of this bird.”

www.jharkhandstatenews.com acknowledges indiamapped.in for its valuable fact based description of Koel.I am indebted to this state bird of Jharkhand for making me rely upon it to rise and shine every day morning.Thank you Koel-Ku-Koo!