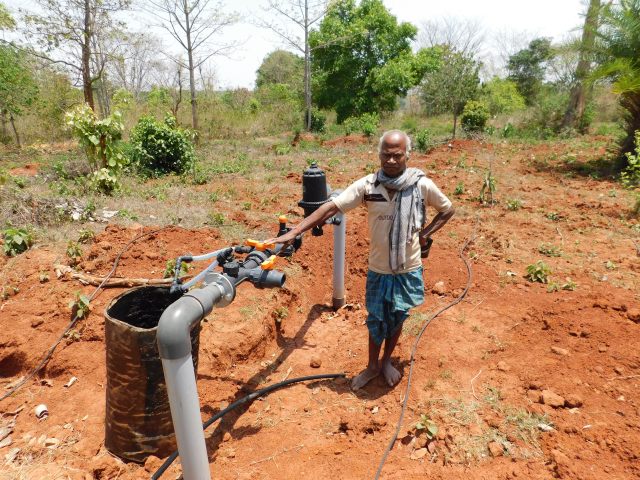 *All images for representation purpose only

Sustainable access to clean freshwater resources is a major concern to support intensification and diversification of farming systems, improve incomes for farm families and provide a buffer against climate change aberrations. Agriculture in different agro-ecologies of Jharkhand is heavily dependent on the monsoon as a source of water, the failure of which causes water shortage and below-average crop yields. Many of the agro-ecologies in the state are characterized with low investment, low productivity, mono-cropping, low productivities and marginal annual returns per unit of land.

The available surface and groundwater resources in the state are estimated at 23.78 and 4.99 BCM, respectively. The stage of groundwater development is 15.0% implying that about 85% of the groundwater is still unutilized and there is good scope to increase the groundwater utilization in agriculture.

The cultivable area is 3.8 million ha and only 12% of the cropped area is under irrigation. Although most of the cropped area is covered with rice during kharif, a major portion of it remains uncropped during succeeding seasons. Despite good rainfall, the cropped area and cropping intensity are low. After the withdrawal of monsoon, the residual soil moisture determines the opportunity for the succeeding crops during the succeeding seasons. Access to irrigation water being the prime reason, there are a number of technological, social and policy constraints that limit multiple cropping within the state.

The level of technology adaptation is also poor leading to lower productivity. The undulating topography combined with a well-developed network of streams leads to quick disposal of runoff from watersheds. Storage of surface runoff is very limited and people depend on irrigation from groundwater even during dry spells within the monsoon season. Low levels of groundwater development on account of limited electrification and poor technology adoption further exaggerate the problems of irrigation in rice-fallow areas.

Traditional methods of water application are still extensively used by the majority of the farming community leading to overuse of irrigation water and reduced water productivities. The remedy for improving water productivities and reducing future water use lies inefficient use of available water resources through the adoption of improved technologies at the farm scale.

This also calls for a revision in existing policies on irrigation infrastructure such that items provided under subsidy schemes match the needs of advanced irrigation technologies as well as the farming communities.

This policy paper attempts to provide critical analysis of the present status of agricultural water management and puts-forth the key technological interventions and policy changes required to achieve efficient water use in agriculture of the Jharkhand state.

Under such circumstances, drip and sprinkler irrigation offers great potential to make efficient use of available water by minimizing the water loss simultaneously reducing the labour and time requirement.

Although the government of Jharkhand is extensively promoting the micro irrigation systems (MIS) through its subsidy based micro-irrigation schemes, this needs to be supported with widespread training programs for the farming community. The responsibility of the government should not end once the system is delivered to the farmers. Many times farmers purchase the MIS out of lucrative subsidies but fail to continue its usage on account of lack of knowledge.

Increasing the level of follow-up monitoring after the installation of a subsidized drip irrigation system is of utmost importance to understand the problems and difficulties faced by the farming community. This should be combined with providing on-site solutions on a payment basis to the farmers. This will not only increase the longevity of the systems but will encourage farmers to adopt the drip irrigation systems on a larger area.

The present ceiling of the area for disbursing subsidies is 1 acre, implying that farmers with the area of greater or equal to 1 acre will be eligible to get the subsidy. Further, there is also a condition that the proposed one-acre land should be in one place as a single plot.

Rather than facilitation, this is more of a limitation for the agro-ecological setup prevailing in the Jharkhand state. A large number of farmers in the state of Jharkhand are of ‘small’ and ‘marginal’ category with fragmented land holdings scattered over multiple locations. Small scale drip irrigation systems suitable for fields of 500-2500 m2 area offer great potential to increase the area under drip irrigation systems.

Provision of subsidies on small scale drip systems will act as an entry point to large scale adoption of micro irrigation systems in the state.

Groundwater lift irrigation systems
Groundwater resource in the state is grossly underutilized. Over the last two decades the use of pumps in irrigation has increased many folds, due to a subsidy offered initially to farmers on kerosene, which also popularised its use in agriculture. These pumps offer access to groundwater but their use is constrained due to limited suction lifts.

Because of their low suction heads, these pumps became practically useless in farms located in the uplands and midlands. The groundwater resource available in the lowlands can be effectively tapped by using submersible pumps of appropriate capacity and suction heads. Such pumping systems can supply water to adjoining uplands and midlands during rabi and summer seasons, leading to improved cropping and better livelihoods to the farmers. In case the ownerships of lowlands, uplands and midlands are different, the water market can be established so that farmers in midlands and uplands can rent the water from the groundwater lift irrigation schemes located in the lowlands.

High discharge Vs high head pumps
In the context that the Government is promoting the use of drip and sprinkler irrigation systems through its subsidy schemes, it is important that these systems should have a matching pump to generate the required pressure to operate these systems. Since irrigation pumps are not covered in subsidy schemes on micro-irrigation, farmers have to depend on the existing pumps which are of low-pressure ratings.

The government should either make a provision of a matching irrigation pump in its subsidy scheme on micro-irrigation or can make it mandatory for the farmers to get the two subsidy schemes simultaneously. This would avoid the system-pump mismatch and can ensure the effective use of government schemes through synergies.

Rural electrification Jharkhand has made significant progress on grid connectivity over the last few years, still large population has no access to regular electricity supply as the duration of supply in most villages averages to two hours per day. Recent survey data from Jharkhand reveals that 13 percent of the state’s rural households still lack access to electricity. Electricity is the critical input in agriculture, particularly in irrigation water supply.

This is the most critical and limiting factor in achieving inclusive growth in the agriculture of the state. The farming community cannot afford the irrigations using diesel pups manly because of its higher running and maintenance costs and the use of electric pumps is restricted because of erratic electricity supply. Rural electrification can play a great role in realizing the twin goals of achieving improved livelihoods and efficient utilization of rice-fallow areas.

Given the context that electricity supply is erratic and diesel operated pumps incur heavy maintenance costs, solar lift irrigation can provide a much-needed sustainable push to the irrigated agriculture in the state. At present adoption rate of solar pumping systems is very low because of the initial investments the farmers have to make. The government of Jharkhand is taking substantial efforts in promoting the solar systems in every district of Jharkhand and people have started realizing the potential of these systems.

The only concern is the size of the pumps provided under subsidy schemes. Most of the pumps are of ‘high discharge and low pressure’ type. This limits the applicability of these pumps in pressurized systems like drip and sprinkler. Working out the optimal size of the pumps to suit the variety of cropping patterns, water sources and pressure requirements of the micro irrigation systems is a challenging task.

The agencies and officials involved in prescribing pump sizes for farmers can make use of the android app “Saur Shakti” developed by ICAR. This is an app with a user-friendly interface that works out optimal pump size depending on the water source, crops cultivated and method of water application.

In the subsidy schemes on solar pumps, the government needs to focus on providing high-pressure pumps in contrast to high discharge pumps. The provision of suitable pumps having comparatively higher pressure heads will enable farmers to use their drip and sprinkler systems continuously without depending on electricity or liquid fuel. Combining drip and solar pumps will not only save precious water resources but will ensure the effective use of on-farm irrigation infrastructure.

Advertising the subsidy schemes in media
Recognizing that television is the most effective way of communication, there is a need to promote micro-irrigation, subsidy schemes, solar pumps and other agriculture schemes through television advertisements. We see a number of advertisements regarding health schemes, education schemes etc. but the subsidy schemes are completely missed out. The procedure to get subsidy are often felt complicated which precludes farmers from visiting government offices for subsidy.

Therefore, explaining the procedures and documentation required for getting subsidy should also be an integral part of such promotions. It is high time that the government should take lead in promoting improved agricultural technologies and subsidy schemes using print and electronic media so that the benefits of such schemes can reach and benefit the farming communities in remotest villages of Jharkhand.