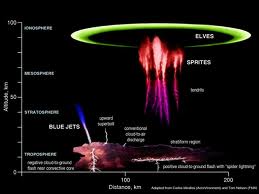 Every body knows that Tsunami can cause disaster.So much so that many defective devises developed to detect it in advance were in use causing false warnings.Now a team led by Philippe Lognonne of the Institute de Physique du Globe in Paris showed that disturbances occurred in the iconosphere within 8 minutes of the Fukushima earthquake of March 11,2011.

“Vertical movements in the earth’s crust produced infrasonic waves that travelled up into the iconosphere and led to fluctuations in the total electron content there.Due to decreasing atmospheric density,the altitude of these waves is magnified a hundred thousand times on the way up”,states GEO,a monthly magazine,in its June 2012 edition.

It add:“If a warning based on changes in the ionosphere had acutally been sent out within 8 minutes of the Fukushima earthquake,the coastal residents of Japan would have had about 17 minutes to make their escape.”