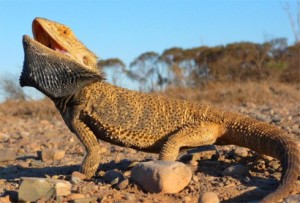 Scientists have confirmed for the first time that sex change in reptiles can occur naturally due to exposure to increased temperatures resulting from climate change.

A climate-induced change of male dragon lizards into females occurring in the wild has been confirmed for the first time, researchers said.

The researchers from the University of Canberra, who have long studied Australia’s bearded dragon lizards, have been able to show that a reptile’s sex determination process can switch rapidly from one determined by chromosomes to one determined by temperature.

“We had previously been able to demonstrate in the lab that when exposed to extreme temperatures, genetically male dragons turned into females,” said lead author Dr Clare Holleley, a postdoctoral research fellow at the University of Canberra’s Institute for Applied Ecology.

“Now we have shown that these sex reversed individuals are fertile and that this is a natural occurring phenomenon,” said Holleley.

Using field data from 131 adult lizards and controlled breeding experiments, Holleley and colleagues conducted molecular analyses which showed that some warmer lizards had male chromosomes but were actually female.

“By breeding the sex reversed females with normal males, we could establish new breeding lines in which temperature alone determined sex. In doing so, we discovered that these lizards could trigger a rapid transition from a genetically-dependent system to a temperature-dependent system,” she said.

“So in a way, one could actually argue that dad lizards make better mums,” said Holleley.

University of Canberra Distinguished Professor Arthur Georges, senior author of the paper, also highlighted the importance that these discoveries have in the broader context of sex determination evolution.

“The mechanisms that determine sex have a profound impact on the evolution and persistence of all sexually reproducing species,” Georges said.

“The more we learn about them, the better-equipped we will be to predict evolutionary responses to climate change and the impact this can have on biodiversity globally,” Georges added.

The research was published in the journal Nature.