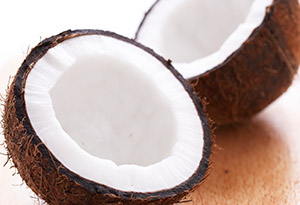 Nutritionists have historically lumped coconut oil into the same category as cream, butter, and lard—namely, “off-limits”—because it consists largely of saturated fat, the kind linked to a higher risk of heart disease.

Finding
Every body knows that not every type of saturated fat is killer.The billion dollar question is whether it contains “medium” or “long” chain fatty acids.Marie-Pierre St-Onge, PhD, a scientist at the New York Obesity Research Center claims that Medium-chain fatty acids—such as lauric acid,makes up about 50 percent of coconut oil.And as such it can be metabolized faster than the long-chain variety.
Coconut oil is also readily absorbed in the small intestine along with other nutrients,meaning they don’t enter the lymphatic system and are less likely to get deposited in the stomach as fat.

Conclusion
Coconut oil is the richest naturally occurring source of medium-chain triglycerides,but these fatty acids represent only part of the oil’s total composition. “We have hints that coconut oil may be beneficial for weight management, but we don’t really know enough to make blanket statements,” says St-Onge. And no research shows conclusively that coconut oil’s health perks are as strong as those from canola oil and olive oil—both of which promote cardiovascular function.