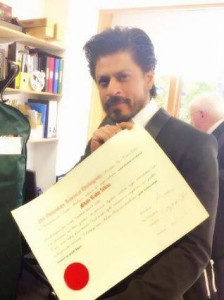 Superstar Shah Rukh Khan has reportedly received an honorary degree from the University of Edinburgh, Scotland.

He received the degree of Doctor Honoris Causa from the University Chancellor HRH The Princess Royal in Edinburgh.

The Bollywood Superstar, who has shown his talent in more than 80 films, was presented with the degree in recognition of his outstanding record of philanthropy, altruism and humanitarianism and his global reach as an actor.

His charitable work includes bringing solar power to rural villages in India, creating a children’s ward at a Mumbai hospital and supporting relief funds to assist areas devastated by tsunamis.