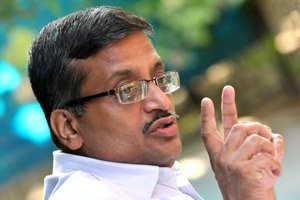 I am shocked to learn that the Harayana government is going to nail IAS officer Ashok Khemka.”

“It seems to be that the Congress government in Harayana is out to please Sonia Gandhi family by punishing him for his only fault that he exposed his son in law Vadra.This is yet another case showing the ruling Congress is out to trample upright bureaucrats”,writes a senior IAS officer who recently retired.

Reports claim that Khemka may be prosecuted for cancelling the mutation of the land deal between businessman Robert Vadra and real estate major DLF in Gurgaon.A report in the Indian Exress claimed toward this end today.

Vadra is the son-in-law of Congress chief Sonia Gandhi.

Haryana chief secretary has compiled comments from the administrative branch and sent them to Chief Minister Bhupinder Singh Hooda.The Indian Express story quoted “sources” as saying that “the state government wanted to prosecute Khemka for highlighting irregularities in the land deals during.”

Khemka was director-general, consolidation of land holdings in 2012 when when he blocked a deals between Vadra’s company Skylight Hospitality and DLF Universal.

Soon after he did that,Khemka was shunted out to an insignificant post.