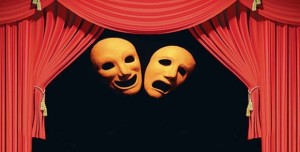 On this day,the world is out to appreciate all those who had contributed in the field of theater.

As it is,honest masters of the theater are normally found far from the stage.They generally have no interest in theater as a machine for replicating conventions and reproducing clichés.

Even in Jharkhand,the tribal dominated State of India,there were many theatre artists.Most of them search out the pulsing source,the living currents that tend to bypass performance halls and the throngs of people bent on copying some world or another.

“We copy instead of create worlds that are focused or even reliant on debate with an audience, on emotions that swell below the surface. And actually there is nothing that can reveal hidden passions better than the theater”,said a theatre artist today.