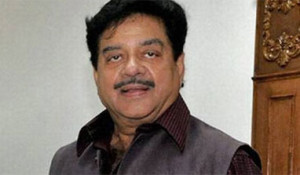 “L.K. Advani was the most suitable candidate for the prime ministerial post.”

“BJP compromised several issues by appointing Gujarat Chief Minister Narendra Modi as the chairman of its campaign committee for the 2014 Lok Sabha polls.”

“(I) have been speaking the truth alone and if it is considered as being a rebel then he would be happy to be called one.”

These statements of 67 –year old actor turned politician and BJP MP Shatrughan Sinha have earned him a popular sobriquet in public-“Khalnayk(Villain).”In fact,he had begun his career in Bollywood by being a villain.Now he has become a real villain,says a school teacher.

“This kind of a man breaks the plate on which he eats.He was always very opportunist.This villain should be flogged in public”,said Randhir Kumar,a computer operator echoing the sentiments of cross sections of the people.

“In autumn of his life,he should have devoted his time to get blessings from the God.Instead,he was doing Chamchagiri of Advaniji and Nitish Kumarji”,remarked Ashok Singh,an entrepreneur.

Even BJP’s four time MLA from Ranchi and former Jharkhand Assembly Speaker CP Singh sounded bitterly critical of him.”While being in the party,his criticisms against our tall leader(Modi) were indicative of his back stabbing character”,said Singh.