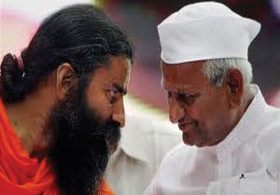 After parting ways with his Team,Anna Hazare was not sitting idle.He had a meeting with Baba Ramdev and former Chief of Army VK Singh.Reports claim that Anna had assured support to Ramdev for any non-political movement. Incidentally, Ramdev is on record having said his movement aims to be completely non-political.

Anna’s meeting with Ramdev and Singh was held soon after his meeting with his Team led by Arvind Kejriwal.Both Kejriwal Team and Anna had an 18 month long association that led a high voltage anti graft movement.

But Anna locked horns with Kejriwal and his supporters including Prashant Bhushan and his father Shanti Bhushan on the issue of forming a political party.

It is learnt that while Anna was a pro Narendra Modi and pro Ramdev,Kejriwal,and Bhushans were “secularists.’