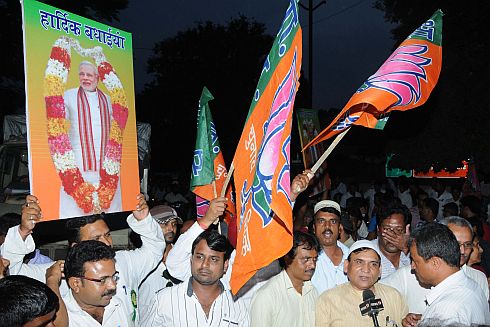 Ranchi,capital of Jharkhand,today erupted in the evening today after the BJP declared Gujarat Chief Minister Narendra Modi as its Prime Ministerial candidate in New Delhi.

Scores of men and women,mostly party workers and supporters,marched through the main road and burst crackers welcoming the party’s decision.”Desh Ka Neta Kaysa Ho,Narendra Modi Jaisa Ho”(How should be the leader of the country?He should be like Narendra Modi),rent the air.

At the BJP’s state unit headquarter office in Ranchi,there was a group of party workers singing and dancing,a feature not seen in the party for long.Most of them were verbose in appreciating the BJP President Raj Nath Singh in prevailing upon members of its Parliamentary Board such as Sushma Swaraj,Murli Manohar Joshi and Ananth Kumar,who were initially not inclined to back Modi,to support him and raise hands in his support.

There was another dimension to their celebrations.Many of them sounded bitterly critical of BJP patriarch Lal Krishna Advani who continued to oppose Modi.One of them who was sober in his reaction said:”Advanii is our tallest leader.Today or tomorrow he will see the writings on the wall and support Modiji who is destined to be the most popular and successful Prime Minister India ever had.”