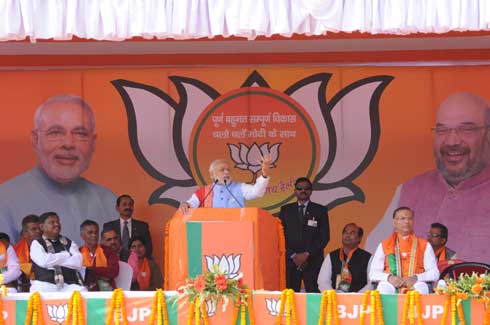 Prime Minister Narendra Modi today exhorted people of Jharkhand to rise above caste politics and nepotism and focus on development.

Modi appealed to the people to give a clear majority to the BJP in Assembly elections elections. “Jharkhand is no ordinary state. It can become the pride of India’s economic development,” said the Prime Minister.

He asked why there is darkness in a state which is rich in coal that is used to supply power to the entire nation. He said, “We have to develop Jharkhand to a level where people from other states come here to work”.

“I am thankful to the people of Jharkhand for voting BJP to power, without your support it wasn’t possible for us to form government in Delhi. Jharkhand is the land of the brave Birsa Munda.You have saved the country, now it is your responsibility to save Jharkhand,” said Modi.

Remembering Lt Col. Sankalp Kumar Shukla who was martyred in yesterday’s terrorist attack in Uri, he said that his sacrifice will inspire generations.